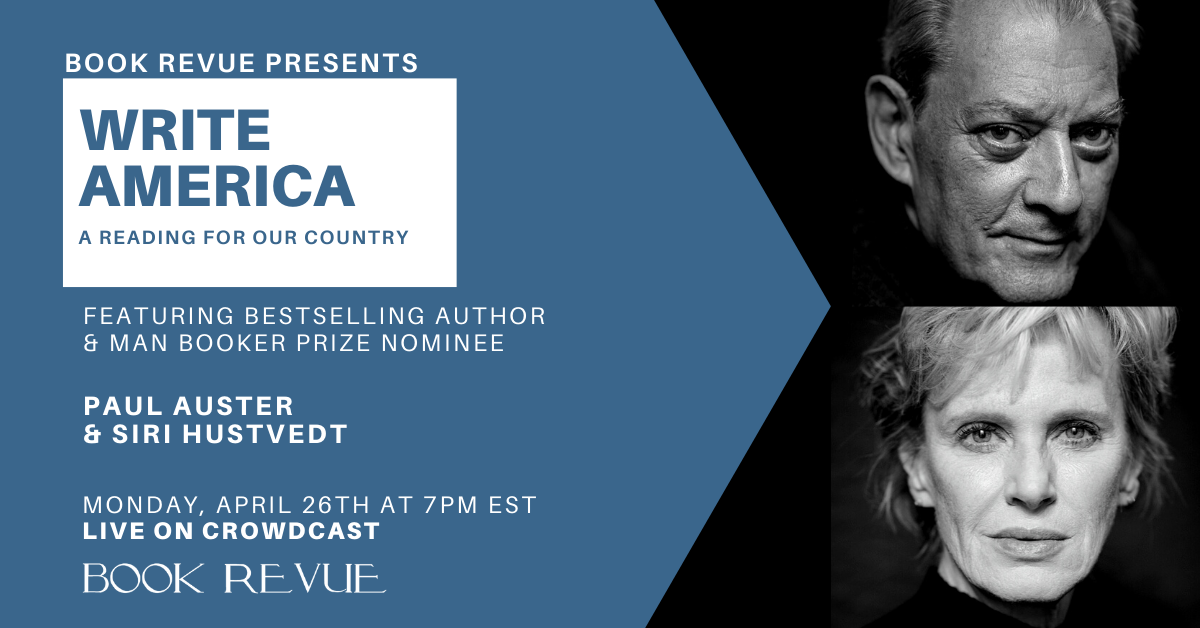 Join us for the thirteenth episode of Write America featuring bestselling author Paul Auster & Man Booker Prize Nominee Siri Hustvedt, as they read and discuss their works and about how books and art might bridge the deep divisions in our nation.

Order SIGNED/BOOKPLATED copies of the selected works of Paul Auster & Siri Hustvedt by adding the books to your cart below!

This event is free to attend. Register here.

PAUL AUSTER is the bestselling author of 4 3 2 1, Winter Journal, Sunset Park, Invisible, The Brooklyn Follies, The Book of Illusions, and The New York Trilogy, among many other works. In 2006 he was awarded the Prince of Asturias Prize for Literature. Among his other honors are the Prix Médicis étranger for Leviathan, the Independent Spirit Award for the screenplay of Smoke, and the Premio Napoli for Sunset Park. In 2012 he was the first recipient of the NYC Literary Honors in the category of Fiction. He has also been a finalist for the International IMPAC Dublin Literary Award (The Book of Illusions), the PEN/Faulkner Award for Fiction (The Music of Chance), and the Edgar Award (City of Glass). He is a member of the American Academy of Arts and Letters, the American Academy of Arts and Sciences, and a Commandeur de l’Ordre des Arts et des Lettres. His work has been translated into more than forty languages. He lives in Brooklyn, New York.

SIRI HUSTVEDT is the author of a book of poetry, six essay collections, seven novels, including The Blazing World and Memories of the Future, and a work of nonfiction. Hustvedt has a PhD from Columbia University in English Literature and an appointment as a lecturer in psychiatry at Weill Cornell Medical College. The Blazing World was long-listed for the Man Booker Prize and won The Los Angeles Book Prize for Fiction. She has been awarded the International Gabarron Prize for Thought and Humanities, the Prix européen de l’essai from the Foundation Charles Veillon, an American Academy of Arts and Letters Award for Literature, and the Princess of Asturias Award in Spain. Her work has been translated into over thirty languages. Hustvedt lives in Brooklyn, New York.

Talking to Strangers: Selected Essays, Prefaces, and Other Writings, 1967-2017 (Paperback)

The Blazing World: A Novel (Paperback)

Memories of the Future (Paperback)