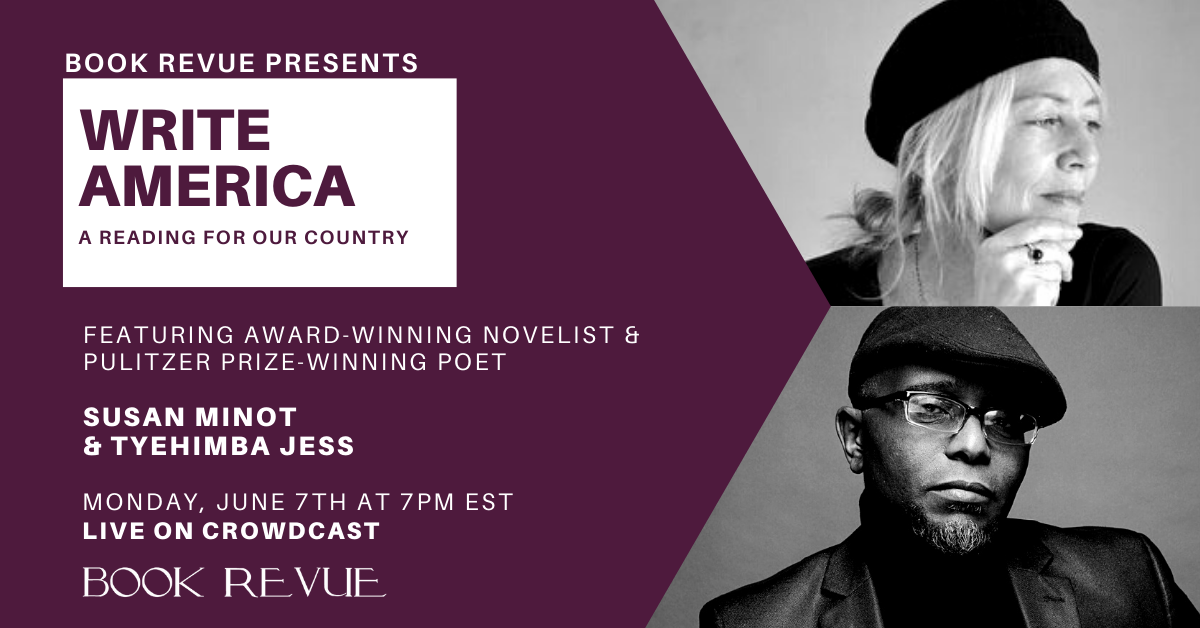 Join us for the nineteenth episode of Write America featuring award-winning novelist Susan Minot and Pulitzer Prize-winning poet Tyehimba Jess as they read and discuss their works and about how books and art might bridge the deep divisions in our nation.

Order SIGNED/BOOKPLATED copies of the selected works of Minot & Jess by adding the books to your cart below!

This event is free to attend. Register here.

SUSAN MINOT is an award-winning novelist, short-story writer, poet, playwright and screenwriter. Her first novel, Monkeys, was published in a dozen countries and won the Prix Femina Étranger in France. Her novel Evening was a worldwide best seller and became a major motion picture. She teaches at Stony Brook University and lives in New York City and on an island off the coast of Maine.

TYEHIMBA JESS is the author of two books of poetry, Leadbelly and Olio. Olio won the 2017 Pulitzer Prize, the Anisfield-Wolf Book Award, The Midland Society Author’s Award in Poetry, and received an Outstanding Contribution to Publishing Citation from the Black Caucus of the American Library Association.  It was also nominated for the National Book Critics Circle Award, the PEN Jean Stein Book Award, and the Kingsley Tufts Poetry Award.  Leadbelly was a winner of the 2004 National Poetry Series. The Library Journal and Black Issues Book Review both named it one of the “Best Poetry Books of 2005.”

Jess, a Cave Canem and NYU Alumni, received a 2004 Literature Fellowship from the National Endowment for the Arts, and was a 2004–2005 Winter Fellow at the Provincetown Fine Arts Work Center. Jess is also a veteran of the 2000 and 2001 Green Mill Poetry Slam Team, and won a 2000–2001 Illinois Arts Council Fellowship in Poetry, the 2001 Chicago Sun-Times Poetry Award, and a 2006 Whiting Fellowship. He presented his poetry at the 2011 TedX Nashville Conference and won a 2016 Lannan Literary Award in Poetry. He received a Guggenheim fellowship in 2018. Jess is a Professor of English at College of Staten Island.

Jess' fiction and poetry have appeared in many journals, as well as anthologies such as Angles of Ascent: A Norton Anthology of Contemporary African American Poetry, Beyond The Frontier: African American Poetry for the Twenty-First Century, Role Call: A Generational Anthology of Social and Political Black Literature and Art, Bum Rush the Page: A Def Poetry Jam, Power Lines: Ten Years of Poetry from Chicago's Guild Complex, and Slam: The Art of Performance Poetry.

Why I Don't Write: And Other Stories (Hardcover)

By Susan Minot
May Be Available to Order
ISBN: 9780307279316
Availability: Limited Availability. We can look into it for you. Availability not guaranteed.
Published: Vintage - March 3rd, 2015