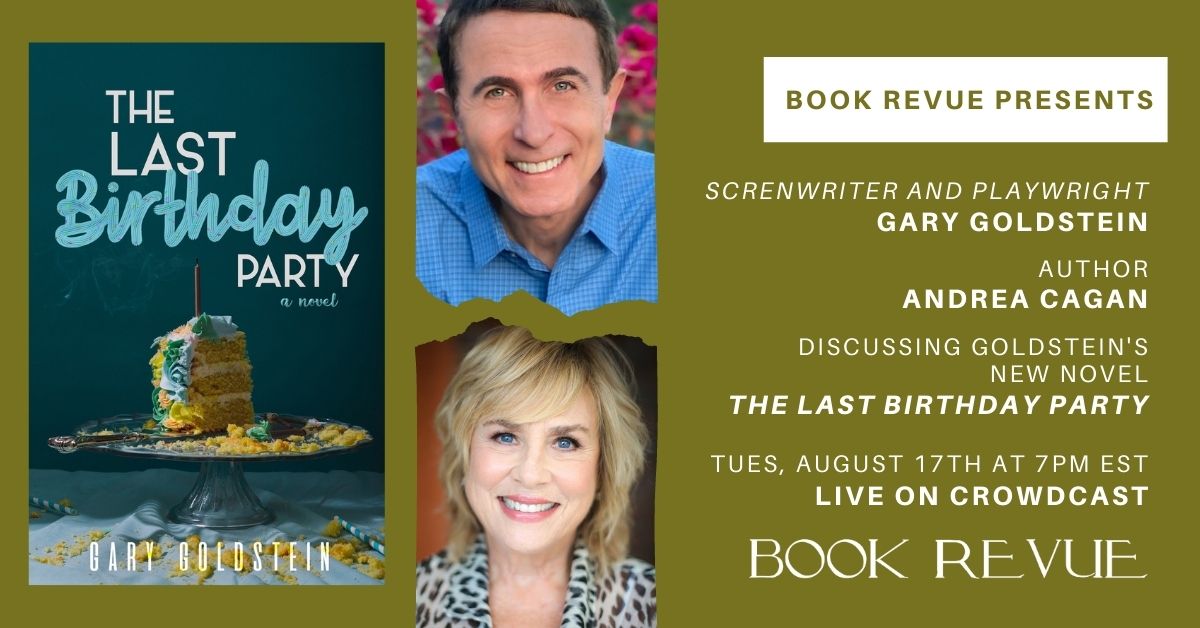 Join us online for an evening with screenwriter and playwright Gary Goldstein as he sits in conversation with author Andrea Cagan to discuss Goldstein's new novel, The Last Birthday Party.

This event is open to the public and free to attend. Register here.

ABOUT THE BOOK:
There’s nothing fabulous about 50 for L.A. film critic Jeremy Lerner, who loses his marriage, his job, and the use of his right arm just days after the birthday party he begged his now ex-wife not to throw him. But fate is a sly devil.

​Jeremy’s string of calamities leads to a game-changing emotional and creative rebirth after he meets the intoxicating Annabelle, a beguiling widow who comes to his rescue—and Jeremy to hers. If only their baggage didn’t match quite so well.

​With the added support of his wise and spirited mom, Joyce, his capricious and big-hearted son, Matty, and Matty’s steadfast new boyfriend, Gabe, Jeremy begins to change in ways that surprise, inspire, and galvanize him. All of this while his career makes a head-spinning leap.

​The thing is, can it last?

​The Last Birthday Party combines wry observation with an everyday wistfulness for a warm, propulsive, humanly funny tale of second chances set against the alluring nuttiness of Hollywood.

GARY GOLDSTEIN writes for TV, film and the stage—and is now a first-time novelist.

He has written more than 15 produced telefilms including the comedies "The Wish List," "Hitched for the Holidays," "This Magic Moment" and "My Boyfriends' Dogs," and the first two movies in the "Flower Shop Mystery" series starring Brooke Shields.

His feature film "Politics of Love," a romantic comedy set during the 2008 U.S. Presidential election, was released in theaters in 2011. He also wrote the feature romantic comedy, "If You Only Knew," starring Johnathon Schaech and Alison Eastwood. Gary's feature adaptation of the novel "Mr. 365" premiered on the streaming service Passionflix in 2018 and is available on Amazon Prime.

Gary has also sold or optioned a number of original screenplays, has a string of episodic TV credits and has sold half-hour comedy pilots to both NBC and Warner Bros.

He was represented on the Los Angeles stage most recently with the World Premiere of his acclaimed three-sisters dramedy "April, May & June," produced as part of its subscription season by Theatre 40 of Beverly Hills. The play won five Broadway World award nominations including Best Local Production.

His family dramedy "To My Children's Father," was selected by Monterey, CA's Paper Wing Theatre Company to premiere in their 2018 "5th Annual Play Reading Series." Gary's latest play, "Dinner at the Harbor Reef," a drama "based on fact, rumor and Hollywood," debuted in a staged reading in 2019 at Beverly Hills' Theatre 40.

Gary is also a freelance film reviewer and arts feature writer for the Los Angeles Times. His first novel, the relationship dramedy “The Last Birthday Party,” will be published August 2021 by Hadleigh House. A New York native, he resides in Los Angeles.

ANDREA CAGAN has been writing, ghostwriting, collaborating and editing for more than three decades. She has had more than a dozen books on the bestseller lists, including four #1 bestsellers in both the New York Times and Los Angeles Times. She has collaborated on biographies with such notables as Diana Ross, Grace Slick, Kenny Loggins, The Doors’ John Densmore, legendary actress Pam Grier, producer Lynda Obst and TV host Joan Lunden. A writing coach for many years, Cagan has also written the books “Memoirs of a Ghost” and “A Friendly Guide to Writing and Ghostwriting.”