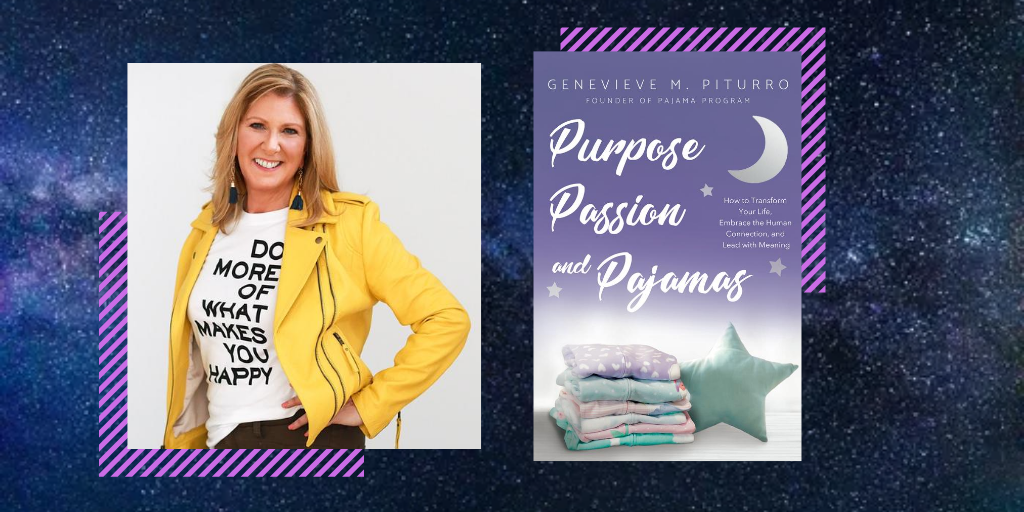 Join us for a pajama party with founder of the non-profit, The Pajama Program, Genevieve M. Piturro as she appears in conversation with bestselling author of An Invisible Thread, Laura Schroff. Learn to transform your life, embrace the human connection, and lead with meaning while they discuss Piturro's new memoir, Purpose, Passion, and Pajamas.

This event is free and open to the public. Registration is required.

ABOUT THE BOOK:
Purpose, Passion, and Pajamas is the story of Genevieve Piturro’s triumphant leap off the corporate ladder to find her life’s true calling. What started with a simple question from a little girl led Genevieve to conceive of and build the nonprofit Pajama Program in 2001, resulting in a featured appearance on The Oprah Winfrey Show and an awe-inspiring display of compassion throughout the US and beyond. Today, Pajama Program has distributed over seven million pairs of pajamas, opened 63 chapters across the US, and established reading centers for children.

In her inspirational narrative, Genevieve Piturro shows you how to

• notice and listen to the quiet, internal voice nudging you in a new direction;

• lead with empathy, passion, and purpose;

• realize the importance of the human connection we’ve lost in our modern world.

Purpose, Passion, and Pajamas brings you to the heart of the matter with eye-opening lessons in leadership, personal growth, and the tools and motivation to “find your pajamas.”

ABOUT GENEVIEVE:
Genevieve Piturro founded the hugely successful national non- profit Pajama Program when a six-year-old girl’s question almost 20 years ago changed her life forever. After a career in television marketing, she jumped off the corporate ladder. Today, her Pajama Program has delivered seven million Good Nights filled with magical gifts of pajamas and books to children throughout the US. Genevieve is now a professional speaker and consultant, sharing life and leadership lessons she learned through her Pajama Program journey. She has appeared on The Oprah Winfrey Show, The Today Show, Good Morning America, The Early Show, CNN, and Fox & Friends and has been featured in O magazine, Forbes, The Wall Street Journal, and Parenting magazine, among others. Genevieve has been the recipient of many awards, including the Shining World Compassion Award; SmartCEO Award of New York; Edith C. Macy Award for Distinguished Service (Westchester Children’s Association); Friend of Abbott House Award; ANDRUS’s Heart for Children’s Award; and the Thomas J. Caramadre, Jr., Humanitarian Award. In November 2011, 914INC/Westchester Magazine named Genevieve one of Westchester’s Most Enterprising Women. Her story has been featured in several books, including Angels on Earth: Inspiring Real-Life Stories of Fate, Friendship, and the Power of Kindness by Laura Schroff and Alex Tresniowski and Unselfish: Love Thy Neighbor as Thy Selfie by Paul D. Parkinson.

ABOUT LAURA:
Laura Schroff is an international and #1 New York Times bestselling author and keynote speaker. Since the launch of her books, An Invisible Thread and An Invisible Thread Christmas Story, Laura has become a passionate and compelling voice on the power of acts of kindness and human connections. Laura's new book, Angels on Earth: Inspiring Stories of Fate, Friendship and the Power of Connections, will be on-sale October 25, 2016. Laura is a former advertising executive, who worked with major media companies, including Time Inc. and Condé Nast, and was part of the USA Today advertising launch team and worked at Ms. magazine. Born and raised on Long Island, Laura lives in Westchester with her feisty poodles Coco and Emma.

Purpose, Passion, and Pajamas: How to Transform Your Life, Embrace the Human Connection, and Lead with Meaning (Paperback)

An Invisible Thread: The True Story of an 11-Year-Old Panhandler, a Busy Sales Executive, and an Unlikely Meeting with Destiny (Paperback)