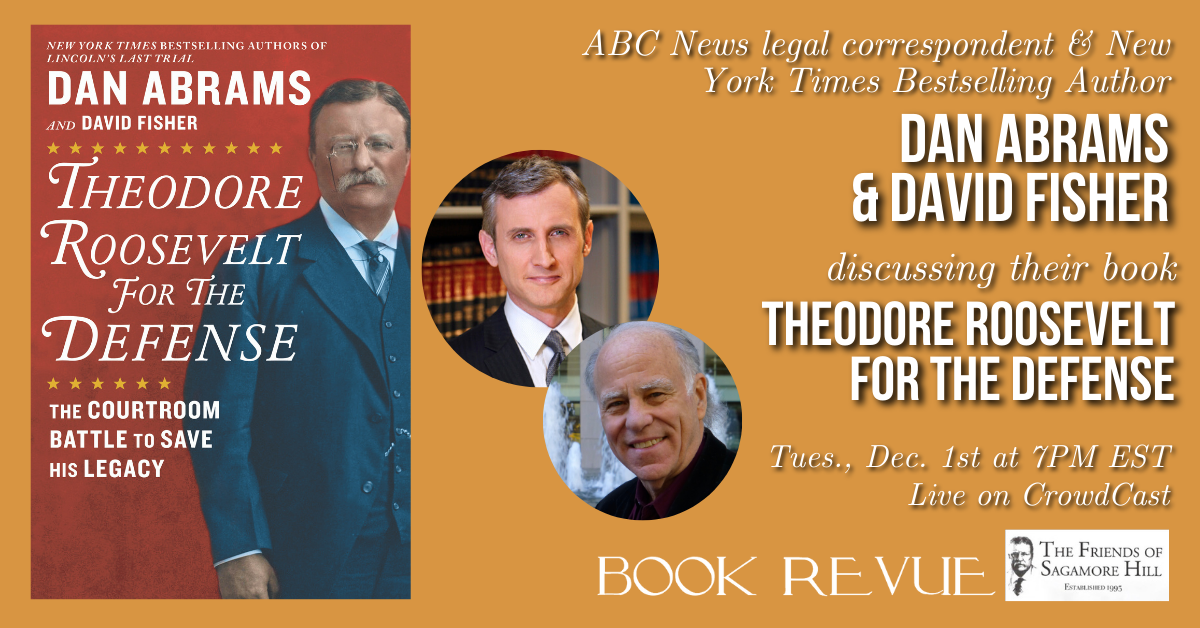 In partnership with The Friends of Sagamore Hill, we are proud to present ABC News legal correspondent and New York Times Bestselling author, Dan Abrams and David Fisher as they discuss their book Theodore Roosevelt  for the Defense:  The Courtroom Battle to Save His Legacy.

This event is free and open to the public. Register here.

ABOUT THE BOOK:
A President on Trial. A Reputation at Stake.

"No more dramatic courtroom scene has ever been enacted," reported the Syracuse Herald on May 22, 1915 as it covered "the greatest libel suit in history," a battle fought between former President Theodore Roosevelt and the leader of the Republican party.

Roosevelt, the boisterous and mostly beloved legendary American hero, had accused his former friend and ally, now turned rival, William Barnes of political corruption. The furious Barnes responded by suing Roosevelt for an enormous sum that could have financially devastated him. The spectacle of Roosevelt defending himself in a lawsuit captured the imagination of the nation, and more than fifty newspapers sent reporters to cover the trial. Accounts from inside and outside the courtroom combined with excerpts from the trial transcript give us Roosevelt in his own words and serve as the heart of Theodore Roosevelt for the Defense.

This was Roosevelt's final fight to defend his political legacy, and perhaps regain his fading stature. He spent more than a week on the witness stand, revealing hidden secrets of the American political system, and then endured a merciless cross-examination. Witnesses including a young Franklin D. Roosevelt and a host of well-known political leaders were questioned by two of the most brilliant attorneys in the country.

Following the case through court transcripts, news reports, and other primary sources, Dan Abrams and David Fisher present a high-definition picture of the American legal system in a nation standing on the precipice of the Great War, with its former president fighting for the ideals he held dear.

ABOUT THE AUTHORS:
Dan Abrams is the CEO and founder of Abrams Media and chief legal affairs anchor for ABC News. He is also the host of both 60 Days In and Live PD on A&E. A graduate of Columbia University Law School, he is the author of the Washington Post bestseller Man Down and has written for the New York Times, Wall Street Journal, Newsweek, and the Yale Law and Policy Review, among many others. He lives in New York.

David Fisher is the author or coauthor of more than seventy books, including eighteen New York Times bestsellers.

Theodore Roosevelt for the Defense: The Courtroom Battle to Save His Legacy (Paperback)