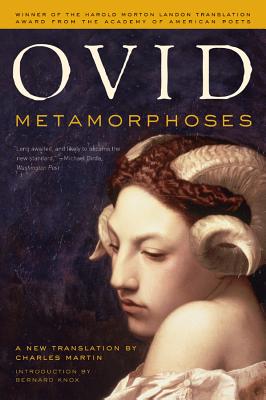 "A version that has been long awaited, and likely to become the new standard." —Michael Dirda, Washington Post

Ovid's epic poem—whose theme of change has resonated throughout the ages—is one of the most important texts of Western imagination, an inspiration from Dante's times to the present day, when writers such as Salman Rushdie and Italo Calvino have found a living source in Ovid's work. Charles Martin combines a close fidelity to Ovid's text with verse that catches the speed and liveliness of the original. Martin's Metamorphoses will be the translation of choice for contemporary readers in English. This volume also includes endnotes and a glossary of people, places, and personifications.

Charles Martin was born in New York City in 1942. He earned a Ph.D. in English from the State University of New York at Buffalo. The recipient of numerous awards, Martin has received the Bess Hokin Prize, the Literature Award from the American Academy of Arts and Letters, and fellowships from the National Endowment for the Arts and the Ingram Merrill Foundation. Three of his poetry collections—Steal the Bacon (1987), What the Darkness Proposes (1996), and Starting from Sleep: New and Selected Poems (2002)—have been nominated for the Pulitzer Prize. His translation of Ovid’s Metamorphoses won the 2004 Harold Morton Landon Translation Award from the Academy of American Poets.

Martin gets both the humor and the pathos.
— Emily Wilson, professor of Classical Studies, University of Pennsylvania

This translation of the Metamorphoses is all that one could wish.

Among the accomplished translations of Ovid in our day, this version of Metamorphoses by Charles Martin—elegant, witty and exuberant by turns, and epic in its span from the creation of the world to the apotheosis of Julius Caesar—should now lay claim to its own distinguished ground.

Charles Martin's new translation of the Metamorphoses, the latest in a 500-year-old tradition, both gives us an Ovid for our times and reminds us that in our times Ovid is everywhere.

[Martin] has caught Ovid's sly ironies, his un-Virgilian briskness, and his own kind of tough-minded pathos, and has created a completely convincing poetic voice. The translation is a marvel.
— Rosanna Warren

I read right through this translation and so exhilarated was the handling of movement and metaphor throughout that when I finished I wanted to start over.... Charles Martin is to be congratulated for a singular achievement.
— William Jay Smith

Ever since Horace Gregory published his translation of The Metamorphoses in 1958, it hasn't been bettered—until now. Charles Martin's muscular version in blank verse is remarkably lively and modern, the Ovid for our time.